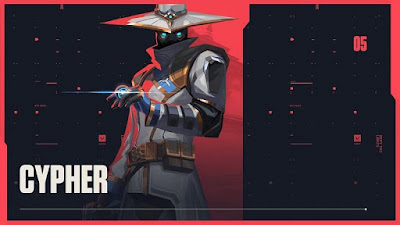 Cypher is an Agent in Valorant. We can call him Radiant also. After the First Light event on earth in the year, 2050 everything changed. Science, technology, earth, environment everything. The only thing that was important in this new earth is radianite.

Kingdom, the biggest corporation on earth after the event has most of the radianites. Which they use to test in their lab to build new things, try in on human beings to give them abilities, superhuman powers, heal the wounded people. They also bring back some dead people too.

Valorant is an organization that works under Kingdom. They hire the most talented people on earth who have unique abilities or powers and who are the best at their work. They need those agents to protect the radianite and do some other work for Kingdom.

Cypher works under valorant. But he was an assassin, a contract killer before. He was an engineer and hacker also who works on new weaponry and equipment. He is from Morocco and his real name is Aamir.
He had a wife and a kid. His wife's name was Nohra. He used to kill high-value targets. He was really good at his work. His aim and technology were so much better than any other assassin available out there.

They told cypher that it was the other organization who were the enemies of the Kingdom corp. and who try to bring it down by stealing and destroying the radianites had killed his family and they will help him to take his revenge.

Thus he joined Valorant and trained there and now works under them. He loved his family so much and that's we why can hear him say in-game that ''I can't lose this family'' which is his team in-game.

You can also hear him say when resurrected by sage in-game- ''For a Moment, I saw them'', which is the saddest line by the cypher.

Here are the other voice lines by cypher which is related to his story.

Well, that's all for now. Will come back with the story of other agents soon. Hope you enjoyed his story.

PUBG MOBILE SEASON 11 RANK UP REWARDS Season 11 Rank up rewards are here. It was Out weeks ago and i have already made a video with all these. Well thanks to Invisible Invisible Flameskii & SjrLive for the help. These are the Rank up rewards only and some upcoming lab skin as well as crate skin. You can Checkout the video here -  Season 11 Royale Pass Rewards Leaks coming in few days, may be in two or three days. You guyz been asking for the leaks of season 11 so made this post. Here the Rewards and leaks we have for now-  Ace Tier Reward-  Diamond Reward-  Gold Tier Outfit-  AKM Lab Skin (Not Sure if Its out now in game or not)  Crate Skins- Thats All for now. Wait and stay tune for more. Season 11 Royale Pass Rewards in Few days. Have a great day and Merry Christmas. You Can Checkout these Posts too- PUBG MOBILE NEW MAP How To get i-Pad View on PUBG MOBILE on Any Android Dev
3 comments
Read more